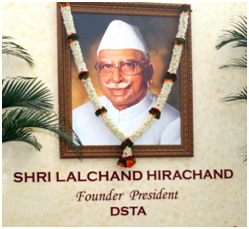 Shri Lalchand Hirachand was an Eminent Industrialist, who along with his brother, Legendry Seth Walchand Hirachand, was instrumental in visualized industrial need of Independent India during pre-Independence days.

Pioneer in Conceptualizing and Implementing organized Sugar cane farming and Setting up of Sugar factories in 1933 at Ravalgaon and at Walchandnagar.

In those days all the Technical Expertiserelated to Sugar Industry was concentrated with British and Europeans and it was not being shared with Indian Technologist’s, thus retaining the firm hold on any developments in the field of Agriculture as well as Factory processing with themselves and thus making difficult for Indian Technologist’s not getting exposed to developing modern processes and Technologies.

It was his initiative and his firm belief that individually each of Indiantechnologists associated with the nascent sugar Industry has the Scientific Mind and Technical capability to develop & acquire requisite expertise for efficient management of Sugar farms and factory. He felt that rather than such knowledge remaining with concerned individual experts needs to be shared for greater spread of knowledge and concurrent benefits to Sugar Industry.

A plat form was needed to share the knowledge and exchange experiences, so that other Technologists can be benefitted.

With this view ,he along with similar like Minded Persons ,conceived and established an Sugar Industry Specific Association ,which was named as “ Deccan Sugar Technologists Association”( DSTA)

Seth Lalchand Hirachand was not only the Founder President of DSTA, but also nurtured it during nascent and formative stage and illustriously Served as President from 1936 to 1950 and relinquished only after DSTA became a formidable industry Specific Association in India serving all the segments of Sugar Industry such as Sugar Cane Agriculture, Factory Engineering, Factory Processing, Co-Product and By-Products